Bankruptcy And The Constitution 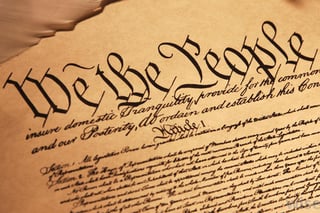 The History of Bankruptcy

The word “bankrupt” itself comes from the Italian word “bacca rota” which means broken bench. In Italy, money brokers used benches to perform there trade. When a money dealer ran out of money, his bench would be broken and he would be ran out of town. Thanks to the Constitution and Congress today there is a more organized way to deal with a person who has a lot of debt and no way to repay or very little in the way of assets that remain.

Chapter 7 Bankruptcy for example, is very methodical as to how we declare someone “bankrupt” and what happens to that person’s assets in bankruptcy. Can you imagine the disruption to commerce if we allowed creditors to collect their debts from debtors in any means necessary like back in the day? You would have virtual chaos. The creditors who were knowledgeable about the debtors financial situation may be the first to act, and the first to seize the debtor’s assets, thereby leaving little to no assets for remaining creditors.

bankruptcy Creates order out of chaos

A chapter 7 debtor files bankruptcy and immediately on the date of filing, the line is drawn as to the Types of Debts Bankruptcy Eliminates and what the debtor’s assets are (with a few exceptions). As of the date of fling chapter 7 we ask the simple question- what are the debtor’s assets and debts. What happens to the debtor’s assets? Imagine a world where if you owed debt, and if you filed bankruptcy, the creditors took all of the debtor’s assets? Seriously, we took their clothes, furnishings, vehicle, home, everything. What would the debtor do? The debtor would immediately march down to his/her county and ask for assistance in the form of clothes, housing, food, cash assistance etc. Obviously, this would not make much sense would it? Now the government, or IE tax payer, would flip the bill to restore what the creditors would receive.

This is why there are exemptions in bankruptcy that get applied to the debtors assets that the state and the federal government believe the debtor needs to go on living, to remain a productive member of society. To the extent the debtor’s assets are not exempt, the trustee liquidates those assets, takes the money and pays the debtor’s creditors in a certain sequence. The bankruptcy code lists several priority debts that must get paid before any others. For example, taxes and child support are among the first to get paid- paid before say general unsecured creditors like a credit card debt or something like that. Now, what happens if there is not enough debt to pay all creditors in full? Then the remaining debt gets wiped out through a vehicle called a discharge. The debtor is able to move on from his debt and get a “fresh start” as it is sometimes referred to.

The policy behind the bankruptcy code is essentially two fold. One, do we really want to see people bogged down in debt for the rest of their lives? Do people in debt buy goods and services? No- they pay debt. If they buy good and services, that is good for the economy because when they purchase those goods and services it employs people who earn money, and then they go spend the money on goods and services and so on. Two, do we want to create an atmosphere where people will not take risks to start a business for fear that the business will fail and they will end up with overwhelming debt they can never repay? No, we obviously don’t, we want a world in which people take the risk of starting a business because successful businesses employ people who buy goods etc. The trade off is some businesses don’t succeed and we allow those people to file bankruptcy- Get Judgment Free Debt Help, rid their debt- and get a fresh start.