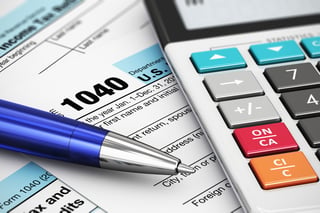 Each year, the federal government collects over $3 trillion in individual income taxes. Some people may think that’s because taxes are so high. That probably has something to do with it. The country’s high voluntary compliance rate (82 percent) may have even more to do with it.

But it’s not all good news. A lot of money, some $320 billion according to the IRS, goes uncollected. The Service states that the main problems are underreported income, underpayment of taxes, and nonfiling. The IRS has a lot of resources with which to collect this money. Even in the downsized IRS, there are agents and accountants whose sole job responsibility is collecting that unpaid tax. These individuals have a lot of tools at their disposal. In most cases, the IRS does not need a court order to garnish wages, file property liens, or even garnish bank accounts.
A Minnesota bankruptcy does not automatically wipe out all tax debt. But either a Chapter 7 or Chapter 13 will take care of a good chunk of it.

Tax Debt and the Automatic Stay

Many laws at both the federal and state level regulate debt collectors. These laws set limits on what they can or cannot do. Many of these laws do not apply to government-related debts, such as taxes.

But Section 362 of the Bankruptcy Code is one of the exceptions. This provision applies to both public and private debts, whether they are dischargeable or not. So, bankruptcy may be the only way to stop aggressive IRS tax collection techniques, such as:

Sometimes the IRS voluntarily agrees to forgo such activity if the taxpayer attempts to work out a payment plan or takes some similar steps. But these promises are not written in stone. The bankruptcy automatic stay, on the other hand, is a separate federal law. The penalties for violating it are quite stiff. The IRS knows this, which is why the IRS immediately backs off the account if the taxpayer files a bankruptcy case.

Federal and state taxes are unsecured debts. Although the IRS can attach property to satisfy a debt, there is no security agreement. In that respect, unpaid income taxes are like credit cards, medical bills, and other types of dischargeable unsecured debt.

But legally taxes are more like alimony and child support. These debts are not dischargeable under any circumstances, even though they are clearly unsecured. The rule regarding Minnesota bankruptcy and tax debt discharge is not quite as strict. These obligations are dischargeable if:

A Minnesota bankruptcy wipes out tax debt if the obligation meets the above requirements. However, bankruptcy does not eliminate the collateral consequences of this debt. In this context, that usually means tax liens. The Minnesota bankruptcy judge has the power to discharge the obligation. But the judge does not have the power to extinguish the liens. If the IRS has taken this action, you’ll need to negotiate with the Service separately on that matter.

Speaking of separate procedures, there may me some non-bankruptcy alternatives to satisfy unpaid tax debt. Given the relatively restrictive discharge rules, many of our clients might entertain one of these options. Some alternatives include:

Sometimes we handle these IRS matters in-house. But if your case is particularly complex, we will refer you to a tax defense attorney in Minnesota.

In many cases, a Minnesota bankruptcy wipes out income tax debt. For a free consultation with an experienced bankruptcy attorney in Minneapolis, contact Kain & Scott. We provide a free credit repair service to our clients.