Personal Bankruptcy Filings are "a Dime a Dozen"- You Aren't Alone 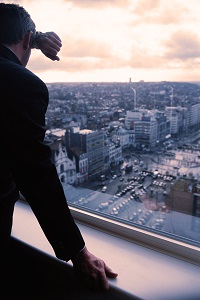 Are you considering filing a personal bankruptcy? If so, I’d be willing to bet you feel like you are all alone; however, that is far from the truth. Often, when you are facing a problem, you feel as if you are alone and no one understands your situation. It is very easy to feel this way when dealing with overwhelming debt. I’d venture to say the vast majority of our clients have felt this way at some point during their struggle with debt. The frustration of not being able to pay your bills combined with the fear of losing everything you worked so hard to build is terrifying. It may seem like you are fighting an army of creditors and debt collectors with no one on your side to help you.

According to NerdWallet, American households, combined, owe almost 4% more debt this year than we did last year. Currently, Americans owe $11.63 trillion dollars. How does your household compare to other households across America? The average household in the United States is $15,607 in credit card debt, $153,500 in mortgage debt and $32,656 in student loan debt. That does not take into account other debts such as personal loans, medical bills and other secured debts that most households in America have as well.

It is not uncommon for individuals to turn to credit cards and personal loans to pay living expenses when they are unable to make ends meet. For example, Jana lost her job unexpectedly last year. She had a small emergency savings fund that helped her make ends meet with unemployment; however, she was unable to find a job making the same amount of money as her previous job. Jana began using her credit cards to pay for groceries and gas because it now took all of her earnings each month to pay her mortgage payment and other bills.

As the months went by, Jana kept falling further into debt. By the time Jana found a job making what she was before her unemployment, she was deep in credit card debt and unable to pay the minimum monthly payments. Jana had not intended to go into debt; however, she did not know what else to do when she was faced with losing her home. But, Jana didn’t let her fear stop her from contacting a bankruptcy attorney for a free consultation.

Because Jana had found a new job, she was able to file a Chapter 13 bankruptcy. Her plan allowed her to pay what she could afford on her credit card bills over the course of 3 years. At the end of her bankruptcy, Jana had no unsecured debt remaining. Bankruptcy helped Jana take control of her finances and solve her debt problems.

If you are struggling with paying bills, you can find relief through bankruptcy. Wes and I, and our entire staff, understand how frustrating and frightening it is when you are unable to pay your bills. Know that you are not alone – we are here to help you through this difficult time.

If you are at all hesitant about scheduling a free bankruptcy consultation download our free eBook, “What You Can Expect During a Bankruptcy Consultation.” This will explain exactly what you can expect from the moment you step into our office.