Will Bankruptcy Clear All Of My Debt? 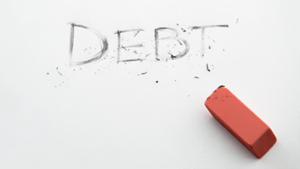 Technically, the answer to this question is “yes.” However, there may be some debt that you do not want bankruptcy to clear.

There’s a significant difference between secured and unsecured debt. Secured debt includes things like home mortgages and auto loans. If the debtor violates the security agreement, the moneylender has the right to repossess the collateral. That right remains in place whether the debtor files bankruptcy or not. Unsecured debts are things like credit cards and medical bills. As outlined below, these debts sometimes have collateral consequences as well. But in most cases, they are quite limited.

Most people file bankruptcy to clear their unsecured debts and obtain more time to repay their secured debts. Bankruptcy does both.

Section 362 of the Bankruptcy Code does not “clear” debt. But it does prevent moneylenders from attempting to collect any debt, whether it is secured or unsecured. Usually after just one missed payment, many moneylenders resort to tactics like:

These tactics are more than just embarrassing. They are unsettling to a great many people. In fact, a quarter of Americans suffer Post Traumatic Stress Disorder-type symptoms over unpaid debt. Among Millennials, the figure is even higher.

Debt buyers are especially aggressive when it comes to collection notices and calls. Consumers have almost no incentive to pay off things like credit card debt that is three or four years old. So, debt buyers badger consumers into payment. The Supreme Court recently relaxed some of the rules in the Fair Debt Collection Practices Act, which is the main pre-bankruptcy consumer protection law in this area. So, these moneylenders may become even more aggressive in terms of the volume of calls and the threatening language they use in these communications.

Usually after two or three missed payments on a secured debt, the moneylender steps up adverse actions. More advanced tactics include:

In some cases, a moneylender does not need to go to court to garnish wages or levy a bank account. Some examples include delinquent student loans and past-due DSOs (Domestic Support Obligations) like child support.

As soon as the moneylender receives notice of the filing, whether it’s a public entity like the IRS, a private entity like a bank, or an individual like your ex-wife, all this adverse action must stop. Out of an abundance of caution, many moneylenders stop sending monthly statements and cancel scheduled ACH withdrawals. If you wish to retain the secured property, it’s best to keep making these payments anyway to avoid a big delinquency later.

The judge usually signs a discharge order about four months after a chapter 7 case is filed.  A Chapter 13 includes a three or five-year protected repayment period, so discharge does not come until later in these cases.

In many ways, debt discharge is like a permanent automatic stay. The credit card or other debt is still there. However, the moneylender cannot make any attempts to collect it.

The collateral consequences remain. For example, if the IRS or Minnesota Department of Revenue has filed a tax lien, that lien remains in place even if a debtor’s personal liability on the income tax debt is discharged. The bankruptcy judge only has the power to discharge debts.

To keep secured property, the borrower must fulfil all terms of the security agreement. That usually includes things like maintaining insurance on the collateral. It always includes making payments as agreed. Bankruptcy is all about giving debtors control over their finances, and this control is available in this area as well.

Reaffirmation is a separate agreement between creditor and borrower that’s part of the bankruptcy. Essentially, both parties agree to reinstate the terms of the original security agreement. The debtor keeps making payments and the creditor takes no adverse action, so long as the debtor fully complies with the terms.

Redemption (refinancing)  is often an option with regard to motor vehicles. In Minnesota, cars and trucks lose most of their value during the first two years. As a result, consumers often owe a lot more on the loan than the car is worth. In bankruptcy, some consumers can pay the current fair market value for the item and own it free and clear.

Bankruptcy clears most kinds of debt. For a free consultation with an experienced bankruptcy attorney in Minnesota, contact Kain & Scott. We promise to be Minnesota’s friendliest bankruptcy law firm, or your money back.